Fewer Regulations Heighten Cities’ Concerns Over Water Quality, Cost To Clean It Up

There’s a city council election in Des Moines soon, and voters have questions about the rivers where the city draws its water supply.

“Is (the water) safe to drink? Is it safe to consume?” candidate Michael Kiernan says he’s been asked.

The Des Moines Water Works spent more than $2 million over two years scrubbing high levels of nitrates from the water that goes to more than 500,000 customers. Cities like Des Moines that are surrounded by farmland worry the cost to treat water polluted by farm runoff is going to keep increasing. And the Trump administration already has rolled back some water rules and may have more in mind.

Listen
Listening...
/
Iowa Public Radio's Clay Masters takes a look at how some cities near farmland have to spend lots of money to clean up drinking water.

“For us to live in the wealthiest nation in the history of the world the most technologically advanced society on planet earth that we have to fight for clean water, I think that’s a shame,” says Abshir Omar, a Somali refugee who also lived in a refugee camp in Kenya. An environmental lawyer, Josh Mandelbaum, is also running for the seat.

But it’s mostly not up to cities, according to Mark Ryan, an attorney who spent two decades with the U.S. Environmental Protection Agency.

“The cities are not in the driver’s seat here, they’re being driven,” he says.

Des Moines’ water utility tried to strengthen the federal Clean Water Act by forcing more regulations on farmers, suing drainage districts in three upstream farm counties in a lawsuit that could have changed the face of farming in the upper Midwest.

The plan didn’t work: A federal judge said any regulations on nitrates — which, when untreated, can be harmful to infants and pregnant woman — must come from the state legislature. And the state of Iowa and farm lobbyist groups don’t want to put more regulations on farmers.

Ryan says because farm runoff is not regulated, cities have to spend a lot of money cleaning up water. There are examples from the Chesapeake Bay in the northeast to Boise, Idaho. For that to change, Ryan says, cities are going to have to get creative.

One solution is having farmers change the way they manage their land and apply fertilizer. Right now, that’s just voluntary.

Plus, there’s a lot of misinformation after the lawsuit, which angered a lot of farmers, says Tim Bardole, who farms about 2,000 acres in north-central Iowa’s Greene County and serves on the board of the Iowa Soybean Association.

“It gets more anger and emotion into a problem which makes it very hard to or solve or improve on the problem,” he says. 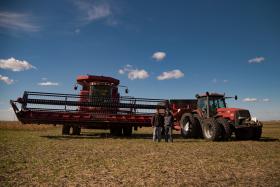 Bardole farms with his father, brother and son. And they’ve changed how they do things to help address various issues such as planting 1,500 acres of cover crops this year to keep more nitrates in the soil and out of waterways.

“But we see it as the best thing to do for the soil, for the environment and just the longevity of the farm itself and the ground,” he says. “When it comes down it down to it too, we drink water too.”

“Our responsibility really requires us to stand up into a headwind even when that headwind is not just industrial producers,” Stowe says. “But national and state governments themselves.” 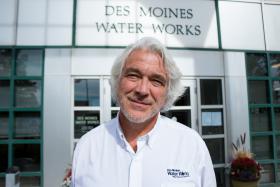 U.S. Agriculture Secretary Sonny Perdue recently signaled the Trump administration wants to eliminate more regulations for farmers, but didn’t specify what those might be. And Environmental Protection Agency Administrator Scott Pruitt says his agency is “beginning the process” of redefining water regulations and believes in “traditional oversight” from states.

“Iowa is home to a robust agriculture industry that EPA should not be on obstructing with unnecessary and costly regulations that do little to promote environmental stewardship,” he tells Harvest Public Media in an emailed statement.

Clay Masters is a reporter and Morning Edition host for Iowa Public Radio in Des Moines. Follow him on Twitter: @Clay_Masters

Plant breeder Jessica Barb is on a mission to improve how sunflowers self-pollinate, a trait that'll be increasingly important to farmers are wild bee populations diminish. Her research tool of choice: a paper towel.