If you pull a fire alarm in any large U.S. city, it's likely that paid firefighters waiting at a nearby station will quickly respond. But seven out of 10 American firefighters are volunteers. They cover vast sections of the country, making up an aging network that is increasingly understaffed and overworked.

Listen
Listening...
/
Listen to this story

On a blazing hot day recently in western Kansas, two men rushed from their jobs to douse a grass fire — for free.

"If somebody wasn't here to do it, this could get out of hand real quick," says Jason Lonnberg, with the Jetmore Volunteer Fire Department.

Volunteers keep fires from getting out of hand in most rural communities. Today, though, many of these departments are barely hanging on.

It's not uncommon these days to find rural firefighters well into their 60s or 70s. According to the National Volunteer Fire Council, about a third of small town volunteer firefighters are now over 50. That's double the proportion found in the 1980s.

And while volunteer firefighters are trending older, they are answering many more calls.

In tiny Cedar Vale, Kansas, for instance, the fire barn is full of old firetrucks, but finding people to operate them is a challenge. Like many remote, rural towns, Cedar Vale is in steep decline, and volunteer Dwight Call says that undermines recruiting efforts. 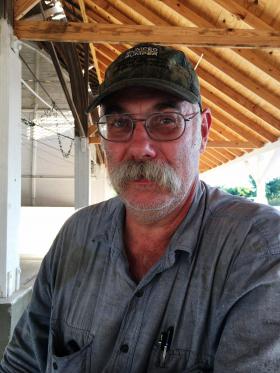 "So, if you live here and you're of working age, you're probably driving someplace to work," he says. "Or, you're working one of two places in town that probably aren't going to let you take off to fight fire."

Call says 50 years ago, when Cedar Vale had lots of small businesses, the volunteer fire department was well-staffed. Now many area residents have a harder time piecing together a living.

The volunteer shortage has pushed Cedar Vale, like many other rural fire departments, to turn increasingly to people like 62-year-old Montra Beeler.

"I'm a firefighter. I drive trucks, fight fires," Beeler says. "I'm kind of the momma of the fire barn."

Beeler, who barely clears 5-foot-tall, says she has a hard time seeing over the hood of big, old firetrucks, but she is a crucial first responder here.

"Right now, the three of us that respond most of the time are me, my son Marshall and Zeke," explains Beeler. "We're the three that usually show up to go to car wrecks, to motorcycle wrecks, to fires."

"When I first started all we did was fires," recalls Mortimer. "Now we're powerline arcing, (responding) to accidents, hazmat, technical rescue. You know, all of the above."

Not to mention medical emergencies. Across the country, calls to volunteer fire departments have tripled in the past three decades. That has slammed volunteer EMS services like the one Chrissy Bartell runs in Norwich, Kansas.

The only doctor in town, whose office used to take up a whole building, left several years ago, Bartell says.

Now, this volunteer ambulance service is the only medical provider in Norwich, and it covers nearly 300 square miles.

"Call volumes are up tremendously, and I don't see that changing, except to increase," Bartell says. 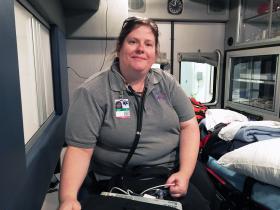 There's no easy solution. Going to paid fire and EMS everywhere would cost a fortune. A National Fire Protection Association study suggests that volunteer firefighters donate about $140 billion worth of labor each year. Even so, many departments have a hard time affording basic equipment, according to Kimberly Quiros with the National Volunteer Fire Council.

"Time and again you hear stories of departments that, you know, are using old gear, that's not necessarily the safest, or old firetrucks and old equipment, or not able to afford the resources that they really need," says Quiros.

And that can affect most anybody. Though bigger cities have paid fire services, volunteers cover most of the country. So, if you have a wreck on a rural stretch of highway – say Interstate 70 in Gove County, Kansas – Steve Hirsch says you'd better hope it happens near the county's one well-equipped fire department.

Hirsch is first vice-chair of the National Volunteer Fire Council, and he serves on the volunteer fire department in tiny Hoxie, Kansas, which, Hirsch boasts, is fully staffed.

"There are some departments that are just begging to get volunteers,” Hirsch says. “Out here, we don't have that much of a problem. Recruiting is one of those 24/7/365 [days a year] deals. We just never stop recruiting."

Like many volunteer firefighters, Hirsch is deeply committed to his volunteer job. Without volunteers and departments like his, he says, huge swaths of America would just burn up.

Frank Morris is a national correspondent and senior editor at KCUR 89.3. You can reach him on Twitter @FrankNewsman.

The social and health effects of isolation on some rural Kansas residents spurred three Catholic nuns to convert a storefront in Concordia, Kansas, into a drop-in center where women can find support and resources.

Seven years after the center opened, two dozen women on average come through each day in the town of about 5,000 to socialize, do laundry, get a cooking lesson, or simply connect with others.