Jared Polis, Walker Stapleton To Face Off In Gubernatorial Race

Republican frontrunner Stapleton handily beat out three others running for the GOP nomination. During his acceptance speech, he focused on his stance on energy and health care, blasting Polis for his support of single-payer health care.

"But now Jared Polis supports a government takeover of your health care," he said. "As your governor I will tackle our health care problems with common sense solutions, not more government and higher taxes."

Stapleton added, "Because in Colorado we know we can do better and we must."

Stapleton is billing himself as a fiscal conservative who will boost the state's economy and prevent government overreach. He backs President Trump's tax cuts and said the country needs stronger border security.

"The president has offered the ability for a million people plus to have legal status in this country - many of them Dreamers, many of them children - in exchange for enhanced border security and we can have both," he said. "We do not have to choose one or the other." 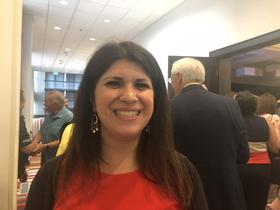 Attendees at Stapleton's watch party included leaders in the statehouse and former Gov. Bill Owens, the last Republican elected to the highest office in the state. Republicans said Stapleton is more moderate than Polis and they think he can appeal to a wider base.

"We want to make sure we have a governor who understand the issues that really affect rural areas," said Mesa County Commissioner Rose Pugliese.

She said Stapleton has done a lot of outreach on the Western Slope and in rural counties and that his stance on issues like energy would be hugely beneficial to the region. She also thinks Trump's popularity in rural Colorado will help Stapleton in November.

"President Trump's policies have been really good for my county," said Pugliese. "Whether it's supporting the Jordan Cove project, which is a natural gas exports facility to Japan. If you really were to talk about his policies it's hard to point to one that hasn't been good for our country or rural America."

At his watch party in Broomfield, supporters chanted Polis' name over and over as the numbers rolled in on a 10-foot-tall projector screen. After taking to the stage, the candidate thanked his team and Democratic competitors.

Polis focused the majority of his victory speech on the long slog to November.

"We all know we're not there yet," he said. "Before we can turn our bold vision into reality, we have to go up against Walker Stapleton, who offers a starkly different vision for our country and state."

Polis outspent his three Democratic competitors by a longshot, reportedly dropping more than $10 million on his campaign to date.

Polis campaigned on progressive ideas like free preschool and achieving 100 percent renewable energy statewide by 2040. He is also the first openly gay candidate to run for governor of Colorado.

Polis adopted a surprisingly friendly tone as he brought up how he'd interact with President Trump as governor.

"You know what? I'm willing to work with anybody to make Colorado work," he said. "And if President Trump is serious about investing in infrastructure, if he's serious about creating jobs, he'll have a partner in me." 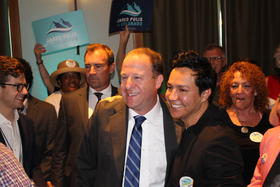 The line got a few knowing laughs from the crowd. At rallies and on social media in recent days, Polis has distanced himself from the Trump administration's immigration policies around separating families at the U.S.-Mexico border.

In the crowd Norberto Mojardin, the owner of Beto's Hair Studio in Denver, was sipping a glass of wine as he heard the news of Polis' win.

As a small business owner with a predominantly Latino clientele, he said he's seen Polis express his concern for equal treatment of minority communities.

"For me, it's very important to support someone like him who is really worried about us as a community ... business owners in the Latino community," he said.

This election was the first where unaffiliated voters, representing a third of Colorado's electorate, could participate in the primary process. The Colorado Secretary of State's office reported that over 1 million people returned mail-in ballots.

Ballots for the 2018 Primary Election are arriving in voter's mailboxes this week. There is a change in the process this year, though, as unaffiliated voters are now able to cast votes in the primary. El Paso County Clerk and Recorder Chuck Broerman shares details what voters should expect.

The four Democratic candidates vying to replace Gov. John Hickenlooper recently discussed everything from transportation and education to fixing the state's budget in a debate this week.

3 Of Colorado's GOP Candidates For Governor Face Off In Debate

The last Republican governor of Colorado, Bill Owens, ended his term in 2007. That's why the GOP is pushing hard to replace term-limited Gov. John Hickenlooper.