Colorado lawmakers returned to the Capitol to begin work on a number of issues such as how to improve the state’s roadways. But amid the usual pomp and circumstance and speeches that usher in the four-month 2018 session, the cloud of sexual harassment allegations loomed large.

Three lawmakers go into the session facing formal complaints about their behavior after our reporting revealed problems: Sens. Randy Baumgardner and Jack Tate, both Republicans, and Rep. Steve Lebsock, a Democrat being pressured by his own party to resign.

Five women have gone public with accusations about Lebsock; two have filed complaints with legislative leaders, including Rep. Faith Winter, a Democrat.

“The right thing has already happened because Faith spoke out,” said former lobbyist Holly Tarry, who was among the people wearing black during opening speeches at the Capitol on Wednesday (Jan. 10, 2018). Attendees wore black to the Golden Globes awards earlier this month to show unity against sexual harassment.

“I hope that he is expelled he’s clearly not fit for office and Faith should not have to work with him.”

Lebsock strongly denies the allegations against him. Earlier this week, he put a 28-page defense of himself against the allegations in every House member’s mailbox. We decided not to re-publish that paper because it includes uncorroborated sexual details about two women.

“The accusations against me are politically motivated,” Lebsock writes in the complaint. “It is sad that politics has become so dirty, even within our own party, that some use false allegations to demean and discredit. This behavior must stop now. I hope false allegations by some will not cause victims of serious crimes out there from wanting to come forward.”

Former aide Cassie Tanner also wore black. She has joined in allegations against Lebsock and was invited by Winter to watch on the House floor -- and was anxious.

“It’s not easy being called a liar,” she said. “I’ve been on the House floor on opening day many, many times and it’s always something I’ve looked forward to. Today, I’m dreading running into him.”

Our reporting at Colorado’s most prestigious workplace, the state Capitol, shows how the movement has taken root there. 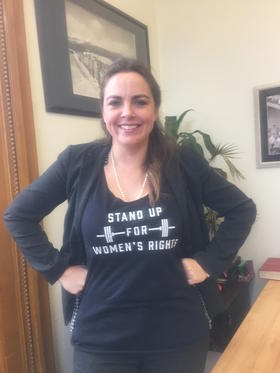 “It certainly has been apart of almost every conversation I’ve had at town halls or with people who work within the building, in pre-session discussions,” said Democratic Sen. Kerry Donovan of Vail.

She was wearing a black and white t-shirt that read, “Stand up for women’s rights.”

“This is a building filled with leaders and as leaders in the state and in this country we’ve got to make sure this dialogue stays at the forefront,” she said.

Legislative leaders brought up the topic in their opening day speeches.

“We must confront these issues head on and successfully reform the culture of the Capitol,” said Democratic Speaker of the House Crisanta Duran to rousing applause.

The House Minority Leader took a more measured approach even though he said he shares a sense of outrage when he hears about allegations.

“But when accusations appear where the law is made, we must observe due process so that we fairly and objectively handle complaints and workplace issues,” said Rep. Patrick Neville, a Republican. “The new policies we have adopted and the additional HR resources we are providing will help ensure future issues are handled appropriately. My door is always open to anyone who might want to report an issue that makes working here problematic.”

The Capitol is set to hire an independent human resources person in the wake of numerous harassment allegations. It’s not yet clear what role the new HR person would play, but it may take any formal complaints or investigations out of the hands of legislative leadership, which some see as a conflict of interest.

In addition to the workplace harassment issues, the split legislature is heading into an election year. Lobbyist Benjamin Waters said while he strongly believes Colorado shows much more bipartisanship compared to the national level, he thinks it's going to be an unexpected session.

On opening day lawmakers outlined broad proposals to do everything from making housing more affordable to putting more money into roads.

Republican Senate President Kevin Grantham said transportation will be the first Senate bill of the session.

“This legislation will commit a portion of the forecasted revenue surplus year over year to the tune of approximately $300 million and will refer a measure to the voters of Colorado this November asking their permission to issue bonds on this commitment so that we can finally expand the I-25 gap from Monument to Castle Rock, so that we can finally expand I-25 North,” said Grantham.

Grantham then spoke to sexual harassment allegations at the end of his speech.

“Finally, let us commit to creating a welcoming and respectful workplace environment here in the Capitol building,” he said. “Many pundits, commentators, lobbyists, and legislators have made their opinions known, and I don’t think anybody here is of the belief that the status quo is working, or that action shouldn’t be taken.”

The legislature plans to revise the workplace harassment policy and leaders said they’re waiting for formal complaints to be investigated before imposing any potential penalties.

Three Takeaways From Our Interview With Gov. John Hickenlooper

Colorado lawmakers return to the Capitol on Wednesday, Jan. 10, to begin the annual legislative session. For term-limited Gov. John Hickenlooper, he'll soon be delivering his final state of the state address.

Here are highlights from statehouse reporter Bente Birkeland's interview with him.

Three Takeaways From Our Interview With Senate President Kevin Grantham

Listen
Listening...
/
4:30
Senate President Kevin Grantham outlines his priorities for the next legislative session which begins on Jan. 10.

Republican Senate President Kevin Grantham is term limited and sat down with statehouse reporter Bente Birkeland to discuss his focus for his final legislative session.

Speaker of the House Crisanta Duran is heading into her final legislative session as a lawmaker. She talked to statehouse reporter Bente Birkeland about her goals when the session starts up on Jan. 10.

Here are some highlights from statehouse reporter Bente Birkeland's interview with her.