This Is No Reality Show: Federal Employees Reassigned In The Politically-Charged Trump Era

Matthew Allen used to lead the communications team at the U.S. Bureau of Land Management's Washington headquarters a couple of blocks from the White House.

Then he got demoted.

“Leadership,” said Allen, “had asked for my head on a platter.”

It was out of the blue, two days after another embarrassing leak from the Interior Department. The Washington Post had published a map that showed drastic cuts that Interior Secretary Ryan Zinke was proposing for the Bears Ears and Grand Staircase-Escalante national monuments in southern Utah. It was part of Zinke’s recommendation memo to President Donald Trump. 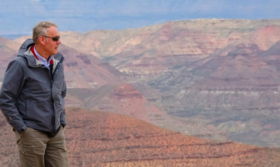 Allen suspects he lost his job because of that leak. He’d had always pushed for more transparency, and he thinks that made him a target.

“My belief is that they suspected me of leaking a series of sensitive documents to the press,” he said in an interview. “They're trying to make an example of this is what happens when you can't be trusted or when you're not ‘loyal to the flag,’ as the secretary likes to say.”

Allen’s story points to a larger controversy that’s been playing out over the past year. It’s the question of what loyalty means for federal employees in the Trump administration.

For Allen, it meant being moved to a different agency at Interior, the Bureau of Environmental Safety and Enforcement. It deals with marine oil spills like the Deepwater Horizon.

“I’m making approximately $160,000 a year, with nobody to supervise, with no clear job duties or responsibilities,” said Allen, who grew up in a Western family with a working ranch. “That doesn’t feel like a good use of taxpayer dollars.”

Like all senior executives, Allen had pledged an oath to the U.S. Constitution, to America — not to one

president or another, not a Republican or Democrat. So, Congress has asked the Inspector General to investigate his and dozens of other odd reassignments at Interior. The Office of Special Counsel is looking at Allen’s case, too.

“This is ridiculous,” said Kathleen Clarke, who was appointed by President George Bush to lead the BLM. She says senior executives expect to be shuffled around.

“It’s just a normal practice, and it’s just what they sign up for.”

“These are charges that are being made for political purposes, that simply don’t stand up to the test,” he said, commenting on the controversy over Interior reassignments.

He calls it “outrageous” for senior executives to think they’re entitled to their federal jobs.

But others see a troubling pattern in the Trump era. Pat Shea is one. He served in the Clinton administration’s Interior Department.

“What’s happening,” he said, “is pure ideologues with no expertise or experience are being put in significant senior positions in the Bureau of Land Management, in the National Parks, in Fish and Wildlife or in the Forest Service.”

And he says the ramifications affect all Americans.

“When you’re needing desperately expertise with wildland fires or water management in the Bureau of Reclamation,” he said, “you’re getting people who, quite frankly, don’t know their head from a hole in the ground — and yet they’re earning $110,000 or $120,000 salaries because they are loyal to the Trump administration.”

Allen used to be part of an elite group called the “Senior Executive Service.” It includes around 7,800 public employees working throughout the federal government.

“These are thousands of people protecting all of our rights every day,” said Katherine Atkinson, a Washington employment lawyer.

“The lives that we all are able to lead are due to the various efforts of federal civil servants. And, if these folks leave the workforce because they're called disloyal and their morale is low, because they're reassigned to jobs they're not qualified for — that comes at a cost to the American people.”

Atkinson represents federal employees from several agencies, including the State Department and the Environmental Protection Agency. She’s also helping Matthew Allen find out why he was demoted. They’ve filed suit under the federal Freedom of Information Act or FOIA. It’s a law Allen used to oversee at the BLM.

“It is significantly ironic or maybe even fateful,” he said, “that the person who advocated so hard for transparency is now being forced to file FOIA requests to get basic information to support my case. Yeah, the irony is not lost on me.”

A few weeks ago, a federal judge ordered the Interior Department to release thousands of pages of documents in his FOIA case.

And, if they do reveal that the leak was the reason Allen lost his job, the big question is: Did he do it?

“I was not responsible,” Allen said, “for the leaking of those documents.”

And, as if to underscore his point, the leaks have been steady although Allen hasn’t been at BLM since last fall.

This story was produced by the Mountain West News Bureau, a collaboration between Wyoming Public Media, Boise State Public Radio in Idaho, Yellowstone Public Radio in Montana,  KUER in Salt Lake City and KRCC and KUNC in Colorado.

If it weren’t for the snowy alpine peaks in the background, camels would look perfectly at home in the undulating yellow sand hills of Colorado’s Great Sand Dunes National Park and Preserve.

“It’s really a very special place. And it is very unusual. It’s almost like an alien landscape when you happen upon it,” says Vanessa Mazal, who has been visiting the national park since she was a kid and now works with the National Parks Conservation Association.

Across eight western states, voters increasingly consider themselves to be conservationists, according to a poll out Thursday from the Colorado College "State of the Rockies" Project. The survey also found that westerners largely prioritize protection of air, water and wildlife over energy development.