Colorado voters will once again decide on an amendment that would give unborn babies the same constitutional and legal rights as a person. The measure is bringing out some familiar faces – it’s also impacting one of the closest U.S. Senate races in the country.

Attack ads are already running on both sides of the political spectrum. One from incumbent Democratic Senator Mark Udall called his challenger’s record troubling.

“Because this really matters, it’s important you hear this directly from me,” starts the political ad, with Udall directly addressing viewers. “My opponent, Congressman Gardner, led a crusade that would make birth control illegal. He sponsored a bill to make abortion a felony, even in cases of rape and incest.”

The bill Udall speaks of is the so-called personhood amendment. Colorado voters overwhelmingly rejected it twice – in 2008 and in 2010.

Republican Representative Cory Gardner was a strong supporter but has since reversed course. His campaign said Gardner now opposes the personhood measure because it has the potential to outlaw common forms of birth control.

Not to be outdone, Gardner too is running his own ad.

“Barack Obama’s smart guys from Washington think they can come into Colorado to play politics,” Gardner says in the ad, directly in response to Udall’s charge. “They’re attacking me for changing my mind about personhood, after I learned more and listened to more of you. No wonder Senator Udall and President Obama can’t relate to that.”

For this third attempt, the language on the initiative is different. Instead of granting personhood at the moment of fertilization, or from the beginning of biological development, the proposal would include unborn human beings in the criminal code and wrongful death act.

Nancy Leong, a professor at the University of Denver’s Sturm College of Law, characterizes the initiative as very sweeping.

She cited child abuse laws as one example.

“If there were some argument that a woman placed her unborn fetus in a position that lead to the miscarriage, then potentially this child abuse statute could apply,” said Leong.

It would also have interesting political implications Leong notes.

“People who believe strongly in reproductive rights will be galvanized.” 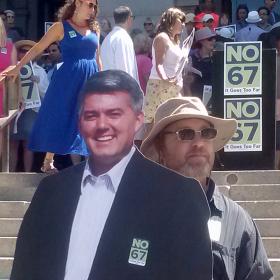 Democrats are certainly trying to use the personhood proposal to attract women and independent voters. At a recent rally to kick off the No on Amendment 67 Campaign, the left leaning group Progress Now Colorado brought a full size cut out of Congressman Gardner to show his flip-flop on the issue.

Colorado State University Political Science Professor John Straayer isn’t sure that the personhood amendment is the fundamental issue – rather it’s the larger backdrop of the race. He said it benefits Democrats to focus on social issues and attempt to depict Cory Gardner’s views as outside the mainstream.

“I think the Udall folks knowing that Cory has an attractive persona, he’s young, he’s energetic, he’s smart, he would be a tough opponent,” Straayer said. “So I think from their stand point the strategy had to be to define Cory for most of Colorado before Cory got a chance to define himself.”

It’s hard to say whether that will be successful.

Polls show the U.S. Senate race is deadlocked. The Republican Party said Democrats are forcing the issue because abortion isn’t a topic at the top of most voters’ minds this election cycle.

It's jobs and the economy on the minds of women voters said Owen Loftus, a spokesman for the Colorado Republican Committee. He doesn’t think the personhood proposal will hurt Gardner - even though Gardner still supports a similar federal measure.

“It’s not personhood federally. The Democrats like to say it is personhood, but it’s not,” said Loftus.

The change is position for Gardner hasn’t been well received with Amendment 67 supporters, like Jennifer Mason, a spokeswoman for the Yes on Amendment 67 Campaign.

“Obviously he’s a victim of some bad political advice, there’s no reason for him to pull local support while he’s still 100 percent behind the federal amendment. It doesn’t make any sense,” said Mason. By changing his position at the local level she said, Gardner is showing it’s more of a political game than personal conviction.

“He certainly didn’t win over any Republicans,” Mason said. “Our base here in Colorado is made up of Conservative voters, who have been very disappointed with Cory Gardner.”

Mason concedes though that most of those conservatives are still likely to vote for Gardner in November, especially when they’re upset over other federal issues such as Obamacare and Benghazi.

The success of the candidate's ad campaigns - and the fate of Amendment 67 - will ultimately be determined by the voters.

Hundreds of people are expected to testify in Denver this week on proposed rules to reduce carbon emissions from coal-fired power plants. The Denver hearing is one of several the Environmental Protection Agency is hosting across the country on the plans.

Sixty-nine year old Stanley Sturgill is from a small coalmining town in southeastern Kentucky. He flew to Denver for the day just to make his voice heard…