Rural America is Growing, But Only Near Big Cities And Scenic Areas

For the first time in seven years, rural America’s population is growing.

The annual U.S. Department of Agriculture report “Rural America at a Glance” found the increase — only 0.08 percent — mainly in scenic rural areas like the Rocky Mountains, more densely populated rural areas and rural communities that are within about an hour’s drive of a major city. Essentially, places where people still have access to urban amenities or can go hiking, biking, fishing or skiing. 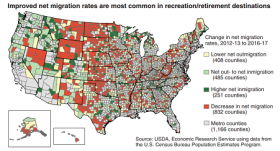 Cromertie pointed out that rural populations are also stagnating because of lower birth rates and more people dying from the opioid crisis.

It's (Not) All In The Family: Outside Help Needed As Farm Operations Grow

Michael McEnany always knew he wanted to be a farmer. Both of his grandfathers were, and he “always loved tagging along with my Grandpa Ed.”

Both of his parents chose ag-related careers, but neither of them went back to the farms they’d grown up on. Still, McEnany’s done nothing but farm for more than a decade. Starting part-time in college, he worked his way up to a full-time, year-round job on Steve Henry’s corn and soybean operation in Nevada, Iowa.

To explain why folks in rural Delta County, Colo. are feeling a lot less anxious than they were a couple years ago, consider the story of Johnny Olivas.

He's digging a line down a steep, dirt driveway, where he'll lay fiber optic cable into a home. His company, Lightworks Fiber, has begun installing badly needed broadband to this remote valley of deserts and aspen-cloaked mesas.

"I didn't know anything about fiber optic, but you catch on pretty quick," Olivas says during a break. "It's a hell of a lot easier than coal mining."

Along the country roads that fan out from Ogallala, Neb., there are abandoned, weathered old farmhouses and collapsed barns, remnants of the hardscrabble settlers who first tapped the Ogallala aquifer and turned the dry, high plains into lush wheat and corn fields.

Like a lot of the Midwest, western Nebraska slowly emptied out over the years, which is why a lot of locals say the current housing shortage is nothing short of a paradox.