How bad is 2018 snowpack in the southern Rocky Mountains, you ask?

Let me count the ways.

Currently, snowpack in the Upper Colorado River Basin, which supplies the vast majority of water for what is arguably the southwest’s most important river system, sits at 69 percent of median. In 2002, the watershed’s driest year on record, there was more snow on the ground at this point in March than there is now. 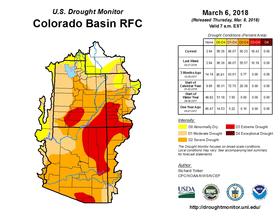 The measly snowfall translates to worsening drought conditions. The U.S. Drought Monitor shows more than 60 percent of the Colorado River Basin classified as being in “severe” drought or worse, felt acutely in the Four Corners region, southern Utah and northern New Mexico.

Projections for the amount of water the Colorado River and its tributaries will dump into Lake Powell, the Upper Basin states’ main water bank account, continue to drop. Without heavy spring snow in April and May, runoff to Powell will rival 2002’s trickle.

Rivers and small creeks in southwestern Colorado and eastern Utah are projected to flow at 28 to 65 percent of their average spring flow.

In Colorado’s mountains, it would take 327 percent of normal snowfall to pull the state’s measly supplies up to reasonable levels. 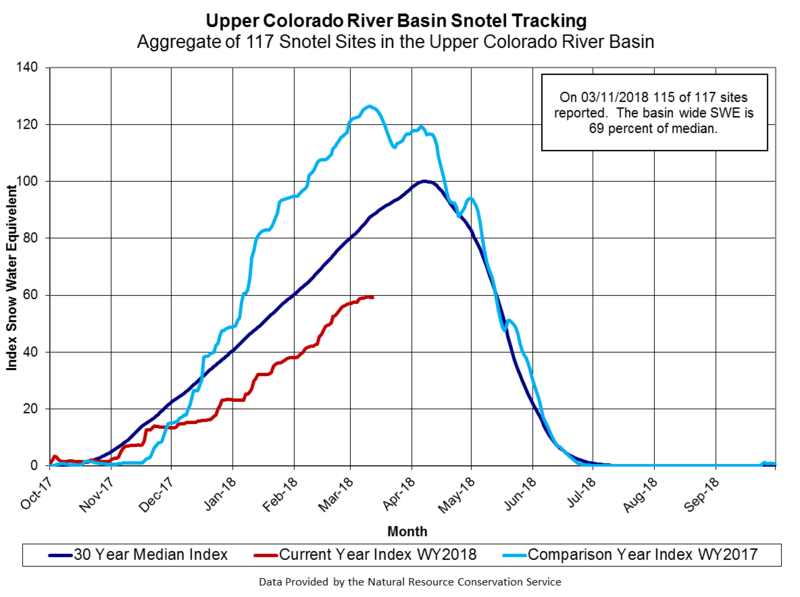 And as scientists at the Colorado Basin River Forecast Center put it in their latest monthly forecast presentation: “Climatologically, time is running out,” to make up the deficit.

So how does all this grim news likely translate into action?

In California, expect more calls for conservation, where some municipalities spend millions of dollars to incentivize homeowners to rip out their lawns or simply to convince them to embrace “the desert look.”

Facing an almost certain shortage on the Colorado River, water officials in landlocked Arizona are beginning to entertain investments in desalination, a technology once thought too expensive to make feasible on the coast let alone to pipe treated water inland.

And across the Colorado River Basin, conservation groups will continue the drum beat for the Drought Contingency Plan, or something similar. The multi-state agreement is an update to a set of 2007 guidelines already deemed obsolete in responding to the 18-year drought that’s upended conventional wisdom about what’s possible in southwestern weather.

But due to intrastate bickering and the inability of some major water users to come to the negotiating table, the deal looks far from finished.

For A Few Weeks The Colorado River Reached The Ocean. Will It Happen Again?

In 2014, the Colorado River did something it hadn’t done in decades. For a few short weeks that spring, the overdrawn, overallocated river reached the Pacific Ocean.

Instead of diverting the river’s last bit of water toward farm fields, the final dam on the Colorado River at the Mexican border lifted, and water inundated nearly 100 miles of the dry riverbed. It was called the pulse flow, meant to mimic a spring flood.

Western Snowpack Is Low. How Worried Should We Be?

This winter in the southern Rocky Mountains is shaping up to be one for the record books. And not in a good way.

Parts of the West are currently experiencing one of the driest and warmest winters on record. Snowpack is far below normal levels in southern Colorado, New Mexico, Arizona, Utah and California, leaving some to worry about this year’s water supply.

When you’ve held on to something valuable for a long time, it can be hard to choose to give it up. When that something is water, it’s even harder — especially in the desert southwest.

But that’s the reality facing water managers in the lower stretches of the Colorado River, a lifeline for farms and cities in the country’s driest regions.