Out of the dozens of lawmakers who hold leadership positions at the State Capitol, only five live on the Western Slope. State Rep. Dylan Roberts is one of them. The Democrat from Avon will lead the state's new Rural Affairs Committee. He says the rising cost of health insurance will be at the top of his agenda when the session starts next month.

Roberts represents two counties that have a lot to brag about. Routt County is home to Howelsen Hill, the oldest ski area in America. A recent study by the American Medical Association found Eagle County residents have the third-highest life expectancy in the nation.

Listen
Listening...
/
Scott Franz reports on one lawmaker's plan to bring more competition to the heath insurance market for the western slope.

But his district also holds an unflattering distinction. It's home to some of the highest health insurance costs in the state. 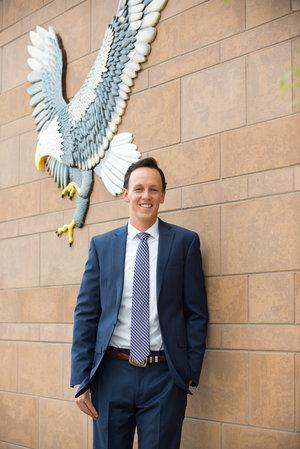 "Insurance companies keep raising their premiums every single year, sometimes by 30 to 40 percent a year, meaning families are having to decide between paying for their mortgage and paying for their child care and insurance and paying a huge percentage of their monthly income to be covered," Roberts said last week between committee meetings.

Where Roberts lives in Eagle County, a family of five has just two health plans to choose from on the state's insurance marketplace - Kaiser and Anthem. According to Colorado Insurance Commissioner Michael Conway, it's even less in some areas.

"There are 14 counties on the Western Slope that only have one insurer, Anthem," Conway said. "Going into next year … those 14 counties were only going to have Anthem."

Residents in rural and mountain locations typically pay about $500 more each month for similar plans offered along the Front Range.

Paul Gerhardt and his wife, Karen, retired in the town of Edwards. They used to pay less than $500 a month for insurance eight years ago. Today, it's more than $1,900.

"It's certainly unpleasant for us to pay that amount of money each month for health care, but we are fortunate enough that it hasn't drastically impacted us the way this issue has for some people," Paul Gerhardt said.

The Gerhardts thought about moving to Las Vegas to save an estimated $10,000 a year on costs, but they're staying put. Roberts says other families in his district aren't as fortunate.

"Now that the individual mandate is gone, we're seeing hundreds if not thousands of individuals and families decide to go without health insurance because of those costs," he said.

Why do residents in some of the healthiest counties in America also pay some of the highest health insurance costs in the country? Steve ErkenBrack is CEO of Rocky Mountain Health Plans, one of the insurance companies serving Western Colorado.

"You have many, many, many communities with only one hospital and one specialist, and as everyone knows in economics 101, that erodes the concept of competition if you have only one person who is out there," ErkenBrack said.

He says it's a problem that only state lawmakers can fix.

"If there were an easy answer, we all would have implemented it a long time ago," he said.

Back at the Capitol, Rep. Dylan Roberts says the combination of a Democratically-controlled House and Senate - along with a Democrat as governor - will clear the way for a fix during the 2019 session.

"My first bill that I'm going to introduce in January is going to be a bill that is going to bring competition into the marketplace by creating a state-backed option," Roberts said.

What does that mean for an individual or family looking for insurance?

Roberts said a state-backed option will give people the ability to purchase insurance from the state instead of a private insurance company. He thinks it will also bring competition to the market and stop the insurance rate hikes.

But Roberts isn't the first lawmaker to try and fix this problem. His predecessor in the House, Diane Mitsch Bush, asked the state to end the system that allows insurance companies to set different premium rates for different regions of the state. The state didn't back the idea over fears such a move could lead to higher costs for Front Range residents.

"It's gonna take a lot of late nights here at the Capitol, but it's something I'm looking forward to getting done," Roberts said.

The high cost of health insurance isn't the only issue Roberts and the Rural Affairs Committee plan to address this session. He says the group will also focus on expanding high speed internet to more rural areas — and try to find ways to fund the Colorado Water Plan.

Capitol Coverage is a collaborative public policy reporting project, providing news and analysis to communities across Colorado for more than a decade. Eleven public radio stations participate in Capitol Coverage from throughout Colorado.

Democratic State Sen. Daniel Kagan announced Wednesday evening he is resigning from the legislature next month.

In a statement announcing his departure, the lawmaker from Cherry Hills Village didn't give a specific reason for stepping down. But Kagan found himself making headlines last year for using the wrong restroom at the Capitol.

Polis Announces First Round Of Hires For New Administration

Gov.-elect Jared Polis is bringing a former political rival and members of his congressional staff into his new administration.

Cary Kennedy, who finished second behind Polis in the Democratic gubernatorial primary, will serve as a senior fiscal policy advisor for the new governor. Kennedy served as state treasurer from 2007 to 2011.

Colorado Transportation Commissioners Worry About The Financial Road Ahead

State Transportation Commissioner Rocky Scott says his lunch conversation at a Colorado Springs steakhouse took on a sobering tone Monday when the discussion turned to the state’s road funding woes.

“I don’t think we’re going to solve this before I leave the commission,” Scott said.

Three weeks after voters rejected two transportation funding measures, Scott and some of the other commissioners who oversee the state’s road improvement budget still sound resigned.

New cars sold in Colorado will have to run cleaner and average 36 miles per gallon by 2025 thanks to new emission rules adopted Friday.

The move was supported by ski areas and other businesses that have called on the state to take steps to combat the effects of greenhouse gases and climate change.

But some local government leaders and auto dealers in the state are afraid these new rules will have unintended consequences.