Some Forests Aren't Growing Back After Wildfires, Says New Study

I’m marching through a stand of blackened, towering pine trees with fire ecologist Philip Higuera. He stops and sniffs the air.

“We can smell the charcoal here,” he says. “You smell that?”

Higuera is a low-key guy with a trimmed beard and sporty sunglasses. But when I ask him whether the massive wildfire that raced across Lolo Peak in Montana last summer was bad, he corrects my choice of words.

According to Higuera, wildfires are a natural and needed part of the environment out West. They act as reset button, killing big old trees and allowing new ones to grow in their place.

But according to a new study published in the journal Ecology Letters, fewer trees are growing back after wildfires in the Mountain West. Higuera blames hotter and drier summers.

“The more we turn up temperature and turn down precipitation, the harder it’s going to be for trees,” he says.

Higuera works for the University of Montana. He co-authored the study. It looked at more than a thousand burn sites spanning three decades across Colorado, Wyoming, Montana and Idaho. 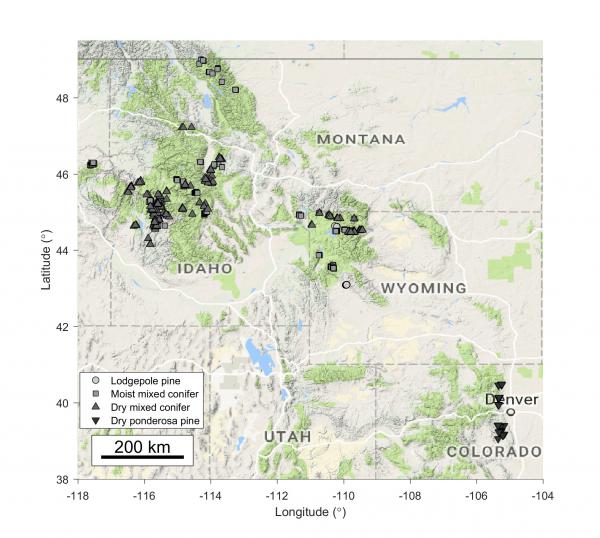 “We’d go out to a region, we’d identify a large fire, and looked for seedlings,” he says.

Seedlings are baby trees and they are really sensitive. They need a couple of mild, wet summers to grow up into adult trees.

But summers in the West are becoming hotter and drier.

When the researchers visited the most recent burn sites they found fewer seedlings were surviving. In fact, in about a third of those sites they couldn’t find any new seedlings.

That has big repercussions, especially in forests surrounding places like Salt Lake City, Boise or Denver.

Higuera says it’s those woods that are most affected because they are at a lower elevation where it’s even hotter and drier than up in the mountains.

When they burn, he says, they may not come back.

“We’re either going to have grasses dominate or shrubs dominate,” Higuera says. “Or another possibility which we won’t know – we’re living out this experiment as humans – is that it could just be that these places take much longer for trees to regenerate.”

Finding out what happens to these forests in the future is Kim Davis’ job. She’s also a fire ecologist at the University of Montana. She’s not optimistic.

“We have to, at some point, accept that we’ve had this impact and things are going to change,” Davis says. “I don’t know how helpful it is to be really upset about losing forests. It just seems kind of inevitable.”

When I bring up a far-fetched idea about irrigating forests to make sure they survive as temperatures warm, Davis dismisses it.

“I don’t think that’s practical,” Davis says. “Trying to reforest or keep our ecosystems the way they are now under climate change is probably unrealistic in terms of budget, and time-money constraints, except for in very specific areas.”

Bottom line: the West may eventually look different than it does now, with more grassland and desert with fewer forests.

“I mean, of course it makes me sad to lose forests, just as a person I feel like we just innately like forests,” Davis says. “But on the other hand I feel like I’ve spent so much time thinking about and studying climate change that I’m kind of like, well, just getting really upset about isn’t going to do anything.”

That means less smoke from those fires so potentially better air quality overall.

A new Gallup poll shows the majority of Americans do believe in climate change. The poll shows 66% of Americans believe that most scientists think global warming is occurring, 64% believe it is caused by human activities, and 60% believe its effects have already begun.

Seventy percent of the world's king penguin population could face threats to its habitat by the end of this century, according to a new scientific model.

The researchers say the problem is that the animals' primary source of food is moving farther away from places where the penguins can breed. They're very likely going to have to swim farther for their dinner.

Decline In Hunters Threatens How U.S. Pays For Conservation