In-State Tuition For Undocumented Colorado Students May Be In Danger

Four years ago state lawmakers – and the governor – created a law to help undocumented children follow their American dreams. They allowed them to pay the significantly cheaper in-state tuition to go to state colleges instead of higher out-of-state prices. The requirements: They must graduate from a Colorado high school that they’ve attended for three years and promise to pursue citizenship.

“This is an issue that has been a challenge in our state and our country for many years,” said Speaker of the House Crisanta Duran, one of the main sponsors of Senate Bill 33.

Listen
Listening...
/
Undocumented students said if they could no longer work in the country legally it would be difficult to afford in-state tuition rates at Colorado colleges and universities.

The bill took seven tries before it finally passed. The debate was heated and contentious. Opponents said they had sympathy for students who arrived as children, but they worried the effort would circumvent federal immigration laws.

But in 2012 President Obama signed the executive order implementing the Deferred Action for Childhood Arrivals, or DACA, program. Undocumented immigrants who came as young children could get a temporary work card and social security number. 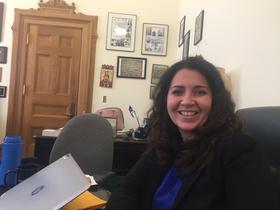 “The fact that the president implemented this and enabled students to be able to be here, get a social security card and go to school -- it was a great boost,” said Duran.

Changes to federal immigration policy have left the future of the state law uncertain. It would remain on the books but would it be effective?

In September President Trump ordered an end to DACA. He asked Congress to come up with a permanent fix. That worries DACA students who benefit from Colorado’s in-state tuition rates.

The Colorado Department of Higher Education says that during the spring 2017 semester, about 1,000 undocumented students across the state benefited from the law – students like 25-year-old Isaias Vasquez. He worries about paying for school if he can’t work legally.

“We have to pay out-of-pocket. It would be difficult to have a job to sustain my education,” said Vasquez. “Not having a job would mean struggling a lot more.” 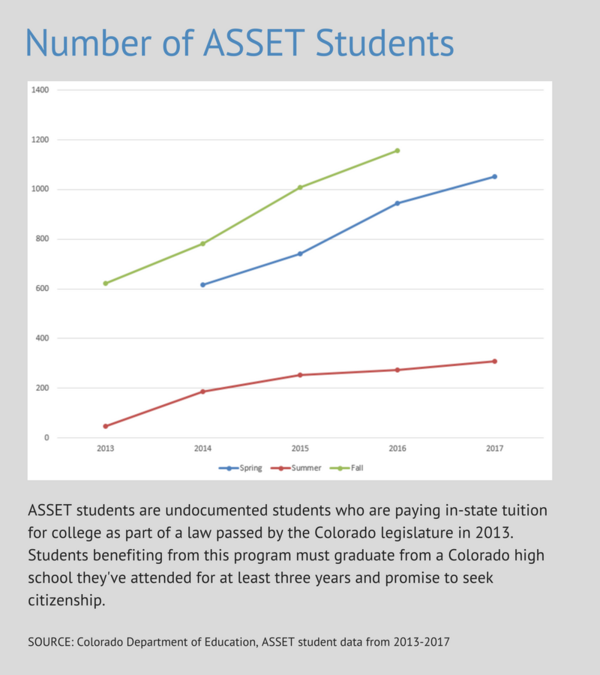 Vasquez came to the U.S. when he was 8 and is now pursuing a degree in social work at Metropolitan State University of Denver in the evenings. He says without a legal path to stay, students like him may not even want to go to college.

“They’re going to be wondering what’s going to happen after they’re done,” he said. “Are they going to work in the field they’re studying?”

The national immigration debate is very much on the radar for school officials at Bruce Randolph High School in Denver. Forty percent of the students there are undocumented. Principal Cesar Cedillo said the in-state tuition law provides hope for many.

“They see themselves with actual hands-on ability to attend a college or university,” Cedillo said. “At our school, our attendance rate is great and we don’t have many behavior incidents.”

With the federal law’s future in question, Cedillo said that could change. He has first-hand experience with uncertainty: He arrived at age 8 and didn’t become a citizen until he was 15 and feels like he embodies the American dream.

“I’m living proof that with an opportunity you can change the world,” he said.

She’s undocumented and hopes to attend the University of Colorado. But if the federal law changes, she doesn’t know how she’ll pay for it. Without a social security number, she said she doesn’t have access to most scholarships.

“So it’s hard to get a legal job here and harder to get my savings for college,” Hurtado said.

She said her father’s deportation case -- which he ultimately won -- has inspired her to become an attorney. While eyes turn to Congress and the debate over federal immigration policies, Hurtado’s are on the future.

“I hope nobody gives up on their dreams,” she said.

Roundup: Where Your Colorado Representatives Stand On DACA

While Colorado’s congressional delegation had mixed reactions to President Donald Trump’s decision to end the Deferred Action for Childhood Arrivals (DACA) program, many continue to show bipartisan support for the policy. The executive order, signed by President Obama, gave children brought into the United States illegally a chance to stay in the country legally.

Hundreds of people gathered in downtown Colorado Springs Tuesday to protest the Trump administration’s decision to end the program known as DACA, or Deferred Action for Childhood Arrivals. The program was created by the Obama administration in 2012, and allowed certain people who had entered the United States illegally as children to apply for work permits and protection from deportation.

The Trump administration Tuesday formally announced it will end the Deferred Action for Childhood Arrivals program — also called DACA — putting an expiration date on the legal protections granted to roughly 800,000 people known as "DREAMers," who entered the country illegally as children.

President Trump issued a statement, saying, "I do not favor punishing children, most of whom are now adults, for the actions of their parents. But we must also recognize that we are nation of opportunity because we are a nation of laws."