He owns a small business that does contract work for some of Colorado’s largest oil and gas companies. She runs a marketing firm from home and lives within a half-mile of three well pads.

Platteville resident Roy Ramirez and Erie resident Erika Deakin both want good futures for their families. Both want safe development of oil and natural gas. But both sit on opposite ends of the statewide 112 debate.

The measure seeks to dramatically increase the minimum setback distance for new wells from homes, schools, waterways and other areas a municipality deems “vulnerable.”

If passed, Proposition 112 wouldn’t impact existing wells, only new ones, nor would it influence how close new home developments can be built to established well pads.

Colorado’s number of new drilling permits has hit record highs in the past year. Activists say larger setbacks are necessary to safeguard the state’s growing population as the industry expands. Opponents argue it would kill thousands of jobs and decimate the economy.

Neither Deakin nor Ramirez work for the campaigns for or against the measure. These are the stories behind their votes.

When he was young, he topped onions. After high school, he pursued a career in construction, operating a concrete company for several years before coming to work with his father.

In 2013, he took over RAM-CO Services, a maintenance contractor for the oil and gas industry started by his father, a first-generation Mexican immigrant.

“My father taught us to, you know, the same old saying, if you're going to do something, you got to do it right,” he said, pouring a cup of coffee. “Otherwise, don't do it at all. I instill that in my guys.”

His wife also took a job helping with RAM-CO’s growing amount of administrative work. Today, the company employs about 40 workers, and he says they’re hiring more.

Proposition 112 would increase the setback distance by up to five times its current distance in some areas. Ramirez said he sees that as a major threat to his livelihood.

“It’s just, it's like sticking a knife in us,” he said. “A lot of my work is, I'm helping out in the beginning process and then at the end of the new builds. If they're not going to build anymore, there's really no reason to keep some of these smaller companies on their locations.”

Last month, some industry reps came by his office with a warning. They said a setback increase would slow production and lessen the need for contractors. They left behind dozens of campaign brochures.

Below the warning, a state map colored almost completely in red shows all the non-federal land that would be off limits to drilling. Ramirez included one in each of his employees’ paychecks in September to motivate them to vote no.

“When you look at it that way in color like that it is very, very scary. When I say it will put me out of business - that's the reason why.” 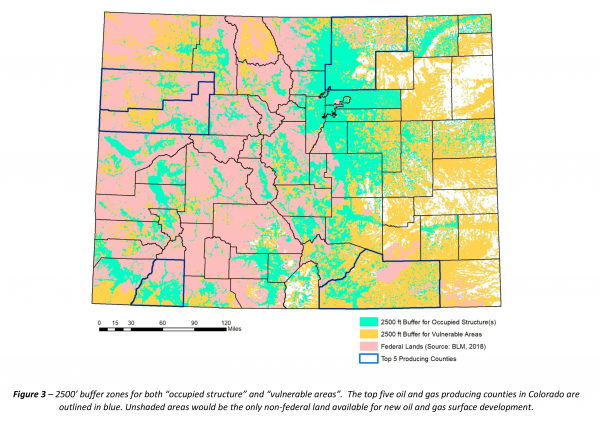 Erika Deakin shudders when she thinks about the tweet.

One night in 2009, she was fast asleep at her Erie home. Out of the dark at 4 a.m., a dull roaring sound burst into her bedroom.

She jumped out of bed, unsure of what was happening and waking her husband and two young daughters in the process. Turns out, it was a well pad being drilled about 2,000 feet from her house.

Tired and upset, she said she called and left a message with the town. Then, the next day, she took to Twitter to voice her frustrations with the company that owned the drill.

“On ZERO sleep today,” she wrote. “as EnCana fires up their gas drill right behind my home. AT FOUR A.M. Colorado’s laws on this stink.”

There was nothing she could do to make it stop.

After moving to her current home in 2013, also in Erie, she figured she’d escaped the noise and acrid chemical smell that wafted through the open windows. But she hadn’t.

Three well pads have been drilled within 2,500 feet of her current home.

Deakin and her husband have purchased decibel readers and made multiple recordings of drilling noises as loud as 80 dB inside their home. Despite filing multiple complaints with the state, she said the periodic noise and smells have continued to plague her life.

That’s why, when she heard about a ballot measure aimed at increasing setbacks, she decided to vote. She said it wouldn’t stop the activity across the street from her house, but it might stop drilling near another neighborhood someday.

“There’s no perfect solution to this but this is one start,” she said. “Right now, the oil and gas industry has all the cards and the rest of us are suffering.”

Anne Lee Foster, one of the organizers of Colorado Rising, the campaign in favor of 112, said the measure is really “about protecting these same people’s long-term health and safety.”

Their aim, Foster said, is not to hurt small business owners.

“Roy lives in a community that has 24,000 active wells that are putting toxic benzene emissions into the air, that are explosive, and we want a high quality of life and clean air for his children as well,” she said.

Karen Crummy, a spokeswoman with Protect Colorado, an industry-backed campaign that’s raised more than $30 million this year to combat 112 and other ballot measures, said thousands of jobs are on the line.

“It’s everything from healthcare to retail to construction, truck drivers, real estate, hotel and food service,” she said.

Crummy wouldn’t comment on the health concerns brought up by Deakin. She said the current setback distances are safe, but the industry is open to discussion.

“But the discussion should be centered on the science,” she said. “Not people’s view of oil and gas.”

But it’s clear that both sides of this issue, like Roy Ramirez and Erika Deakin, are passionate about the debate.

Mail-in ballots have been sent out to voters. The midterm election will be held Nov. 6.

Jared Polis and Walker Stapleton squared off Friday morning inside of a barn in Kersey, just east of Greeley. The debate venue was so rustic, the tables in the barn were all equipped with fly swatters.

Here are three things that stuck with us after the debate.

In 2002, voters in Colorado supported sweeping changes to state campaign finance laws. The goal was to rein in the influence of money in elections. The law contained a strong preamble about how large campaign contributions could corrupt politics and give special interests, corporations and the rich disproportionate influence.

Then along came the millionaires running for governor, spending millions of their own dollars on their own campaigns.

Republican candidate Walker Stapleton ignored the moderators' questions about statewide issues late in the debate as he repeatedly criticized Democrat Jared Polis for an incident that occurred nearly 20 years ago.

Kanye West just made news with his hard-to-follow tweets on the 13th amendment. Meanwhile, Colorado is focused on possibly changing a state version of this centuries-old law.

A printing error is keeping some Colorado voters from studying up on statewide ballot items this election season.

The error caused some of the state's voting guides, known as blue books, to be printed without some of the pages.