The Trump administration wants to show rural communities, which voted for him by wide margins in the 2016 election, they are still on the president’s mind. It suggested a list of broad ideas in January to spark growth and carved out rural interests in an infrastructure plan.

But those who work on rural development aren’t all sure the White House has people’s best interests at heart, given that Trump has proposed making cuts to programs that benefit those areas the most.

When President Donald Trump met with state and local officials on Feb. 12 to detail the administration’s infrastructure proposal, he highlighted a special appropriation for rural areas.

“It provides $50 billion for rural infrastructure, who have really been left out. The rural folks have been left out,”  Trump said. 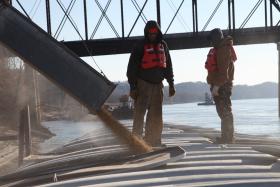 Eighty percent of that would be given to states based on population and the length of county roads; governors would choose how to dole it out from there. The proposed criteria did not include unemployment rates or inequalities along economic or racial lines, though it does recommend dedicated funding for Native American tribes and U.S. territories.

The goal, Trump said, is to spark job growth by building new roads and upgrading utilities, including access to high-speed broadband internet, “which they don’t have and they want it,” Trump said.

Actually, according to the president’s task force, about 60 percent of rural residents have high-speed internet.

But the focus on expanding access puts the administration on the right track, according to Maurice Jones, CEO of the community development nonprofit Local Initiatives Support Corporation. He said it’s key to “catalyze economic dynamism” because it allows wider access to online classes and professional training.

“We’re talking welders and electricians, coding and medical technicians,” Jones said. “If you have the talent that’s prepared for the jobs, the jobs will come.”

But there are other proposals from the administration that give rural advocates like Jones pause.

While the infrastructure plan pledges billions for rural projects, Trump’s budget proposal would cut millions from programs that have a rural focus. In the 16 percent cut eyed for the U.S. Department of Agriculture, $103 million would be taken out of the Rural Business Cooperative Service, which the administration says has been mismanaged.

The service awards grants and loans to small and specialized businesses, filling the gap when private lenders can provide only partial financing or when companies don’t qualify for commercial loans. 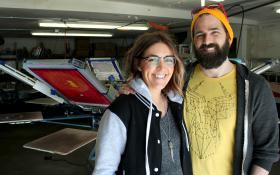 A Nebraska company fell into the latter category. Five years ago, Shawna and Chais Meyer started 24 Hour Tees in their hometown of Kearney, population 33,520.

In a downtown storefront, the Meyers started designing and printing one-of-a-kind shirts, often playing on puns and pop culture. A whole wall is covered with designs ranging from Mr. Rogers to Yoda to bacon. Another one, according to Shawna Meyer: “You’ve got to be kitten me.”

After three years, they were getting orders that were too big for their one-shirt-at-a-time printer. Buying larger equipment required a loan. They visited seven banks in six months; all of them said “no,” in part because the couple had too little to offer as collateral.

“They don’t know what to do with a $30,000 screen print machine if we default on our loan,” Chais Meyer said. “It was like, ‘We don’t want to hassle with it. We don’t want the headaches’.”

They eventually found the Nebraska Enterprise Fund, which lends money from the USDA’s Intermediary Relending Program (IRP). Sixty-thousand dollars later, the Meyers opened a new workshop in a warehouse. The typical order is now 100 shirts at a time, printed on big, spider-shaped machines.

The program that helped the Meyers out issued $19 million in loans in 2016, but is among those targeted by White House cuts.

“It would be a huge disservice to businesses like us to not even have that option,” Chais Meyer said.

“When we really break it down and look at where job growth is in rural communities, it’s happening through those small businesses,” Hladik said. 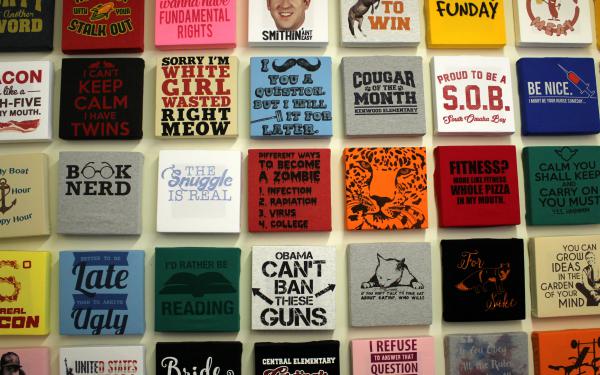 Congress may keep funding the USDA business programs, after all, White House budgets are largely for show. But the proposed cuts could find their way into the farm bill, which is up for reauthorization.

Rural development is near the bottom of the list when it comes to farm bill spending: Less than one-tenth of one percent of the entire $489 billion authorization for 2014-2018.

“Even scalpel-sized cuts to rural development can be pretty devastating,” Scott with the county officials’ organization said.

“Nobody’s under the illusion that increased investments will be made,” Scott said. “I think the name of the game is preserving the program levels that are there.”

What’s unclear is whether the Trump administration agrees with that approach, Hladik said.

“We have a sense what they’re watching but we don’t necessarily know which specific policies are (they) going to champion,” Hladik said.

The Trump administration mostly says the right things about rural development, Hladik said, but he’s concerned it might just be lip service. With that in mind, he said he’d accept the status quo.

It’s a common story: Ambitious kids move from small towns to larger cities, never to look back. When their parents die, the family wealth that’s been built over generations through farming, ranching or agriculture-related businesses often follows the kids, draining the economic lifeblood from those rural communities.

The largest generational transfer of wealth in modern times is expected to happen in the next 10 years and rural foundations in states like Iowa and Nebraska are working hard to retain at least a bit of those hundreds of millions of dollars.

Since the George W. Bush administration, the federal government has doled out millions of dollars with the promise to expedite access to broadband service in remote parts of the country.

President Donald Trump is no exception, having signed an executive order earlier this month directing the government to use “all viable tools” to speed up the process to locate wireless technology on federal buildings in rural areas. Plus, Federal Communications Commission Chairman Ajit Pai just proposed putting a $500 million toward rural broadband.

While all political persuasions agree with the recent U.S. Department of Agriculture’s Rural Task Force report that broadband is critical for the economic health of a large swath of the country, experts say the devil is in the details — or lack thereof. They also say Pai’s infusion of money does little more than restore funding that previously had been cut.