Five Things To Know About The Latest Colorado River Dust Up

A quiet, rising tension over water in the southwest has burst into the public square.

Agencies that manage and dole out the Colorado River’s water in Colorado, Wyoming, Utah and New Mexico are attempting to publicly shame an increasingly isolated water agency in Arizona. The feud has the potential to either upset, or reignite, negotiations over the river’s future.

The dispute centers on interpretations of a set of guidelines water managers agreed to in 2007, which called for conservation and a basin-wide approach to water management. Those guidelines are also linked to the fate of the watershed’s two biggest reservoirs: Lake Powell and Lake Mead. If Mead drops too low, Powell sends more water to balance it out.

The Upper Colorado River Commission and Denver Water accused the Central Arizona Project, managed by the Central Arizona Water Conservancy District (CAWCD), of manipulating their water orders to keep Lake Mead from dipping to a level where a shortage would be declared, while keeping it low enough to get more water from Lake Powell’s reserves. 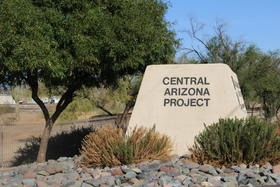 The very public disagreement is a departure from the more typical, cordial backroom discussions and negotiations on river management, where water agencies hammer out details and then outwardly tout their collaborative spirit.

The feud pulls back the curtain enough to give us all a glimpse at some truths about how we manage arguably the Western U.S.’s most important water source:

1. No one person is in charge of the Colorado River.

Given the Colorado River’s importance to life in the West -- like the fact it provides water to 40 million people in the country’s driest reaches -- one would think there’s some group of people who oversee how the river is divvied up.

Management of the river is brought to life by an amalgamation of compacts, treaties and more than a century of case law often referred to as the “Law of the River.” The actors in the Basin — like cities, farmers, irrigation districts, the federal government and conservation groups — all know those rules, built on a foundation called the Colorado River Compact. The compact is a 1922 agreement among all states that receive the river’s water. To this day, it receives healthy doses of both praise and derision in Westerners’ conversations about it.

2. Public shaming is how water managers police themselves.

Because there’s no police force regularly checking in on big water users within the Colorado River Basin, most of the enforcement of rules and norms comes down to the water users themselves.

The letters sent to CAP are a great example of how simple norm-breaking can quickly turn into a multi-state water feud. CAP officials were not coy about their strategy, taking to Twitter to blast out an infographic of their attempt to keep Lake Mead at a “sweet spot,” ensuring additional water from Lake Powell. It was a way to push back against a proposal from Arizona Gov. Doug Ducey that would give the state more control over some water conservation. They communicated the strategy to a room of 20 reporters in late February.

But in the eyes of the Upper Basin, CAP crossed a line.

“Although we have heard these things, we certainly have not seen it become what appears such a blatant, actual publicly-stated policy of CAWCD,” says Don Ostler, the Upper Colorado River Commission’s executive director.

No one accused CAP of breaking the rules. Instead the complaints were that CAP was being sneaky and manipulative.

And how do you bring someone back into the fold who’s perceived as going rogue? You shame them, says Doug Kenney, director of the Western Water Policy Program at the University of Colorado Boulder.

Some of Kenney’s work has received funding from the Walton Family Foundation, which also provides funding for KUNC’s Colorado River coverage.

“The [enforcement] mechanism is usually a social mechanism,” Kenney says. “And the mechanism is all of the other parties get in your face and say, ‘Hey, come on. This isn’t really the spirit of what we’re doing here, let’s get back to working cooperatively.’”

3. The weather plays a role.

The winter of 2018 was pretty dry. The flow into Lake Powell is currently projected to be 46 percent of average during the highest runoff months of April, May, June and July.

The drought that has plagued the southwestern U.S. is now in its 18th year, leaving some to wonder whether this drought is a glimpse at the future in the Colorado River Basin. Warmer temperatures are already sapping the river’s flow.

If this had been a wet year with high snowpack in the Rocky Mountains, there’s a good chance the accusatory letters would’ve never been sent, Kenney says. But scarcity can sometimes lead to conflict

4. This dust up could necessitate federal intervention.

If there’s one thing that most water managers along the river agree on, it’s that they’d rather not live their lives under fiat from the federal government. Even though the decentralized method of river management is sometimes messy, there’s an aversion to federal intervention written into the DNA of the West.

That’s why it’s surprising to see Colorado River District general manager Andy Mueller telling Colorado Public Radio’s Grace Hood that it might be time to bring in the Bureau of Reclamation to force everyone to play nice. That could be a negotiating tactic to get CAP to the table (again, the aversion to federal intervention runs deep).

Still, anytime you see a water manager calling on the Bureau of Reclamation for help in negotiating, it’s notable.

5. This dispute could reignite stalled talks.

No one likes being locked in an intractable argument with a colleague, even if one side is pretty sure they’re right. In the history of Colorado River management, Doug Kenney says this barely registers as a serious fight. Go back at least one generation if you want to see brawls over the river.

“This sort of thing happened all the time,” he says. “There was a lot of distrust and a lot of tension and a lot of name-calling.”

For years now the latest generation of river managers patted themselves on the back for how well they work together. Still, talks to hammer out a Drought Contingency Plan among Lower Basin water managers have stalled, and the 2007 guidelines at the heart of this current dispute are set to expire and will have to be renegotiated in the next couple years.

All this bluster could lend itself well toward getting players to the bargaining table sooner than later, Kenney says.

“The more I dig into this issue the more I think this dispute is healthy,” he says. “And it’s going to be beneficial and will lead to better negotiations and will lead to a better second generation of guidelines.”

That might already be coming to bear. A CAP spokeswoman told Brandon Loomis of The Arizona Republic the agency reached out to Upper Basin officials and are planning to convene an April 30 meeting in Salt Lake City to clear the air.

This story is part of Elemental: Covering Sustainability, a new multimedia collaboration between public radio and TV stations in the West, and part of a project covering the Colorado River, produced by KUNC and supported through a Walton Family Foundation grant. KUNC is solely responsible for its editorial content.

The humpback chub, a fish native to the Colorado River and considered endangered since 1967, has turned a corner.

In a recent analysis, scientists at the U.S. Fish and Wildlife Service say the chub’s five distinct populations throughout the Colorado River watershed in Colorado, Utah, and Arizona are stable enough to reclassify the fish as threatened rather than endangered.

For A Few Weeks The Colorado River Reached The Ocean. Will It Happen Again?

In 2014, the Colorado River did something it hadn’t done in decades. For a few short weeks that spring, the overdrawn, overallocated river reached the Pacific Ocean.

Instead of diverting the river’s last bit of water toward farm fields, the final dam on the Colorado River at the Mexican border lifted, and water inundated nearly 100 miles of the dry riverbed. It was called the pulse flow, meant to mimic a spring flood.

When A Drought Lasts 18 Years, Does It Need A New Name?

From the roof of Chuck McAfee’s adobe farmhouse in rural southwestern Colorado, you can see into three other states: Arizona, New Mexico and Utah. Mountain peaks are just barely visible above the horizon.

Even though this part of Montezuma County is considered the high desert, it’s common for these grass and sagebrush hills to be snow-covered into spring. This year they’re bare, and have been since last winter.